Flying Saucers – Whether a Man-Made Invention or Out of this World, Either May Catch the attention of the United States Government 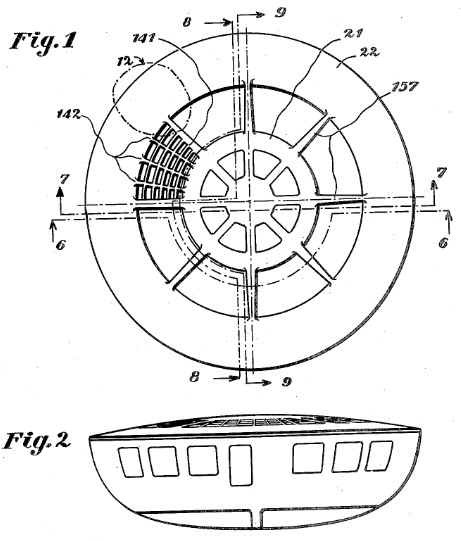 Season 11 of the X-Files is coming to FOX this January 2018, which means more mystery, unexplained phenomena, and UFOs.

In honor of Season 11, let’s take a look at one commonly reported UFO – the “flying saucer.”  The term flying saucer and “flying disc” were popularized in the twentieth century and are now part of popular culture.

However, some flying saucers are certainly not from outer space.  In fact, there have been many attempts to create disc-type flying crafts since even before the term “flying saucer” was popularized.  For example, the first man-made flying saucer craft was called the Discopter and was patented by a man named Alexander Weygers in 1944 (U.S. Patent No. 2,377,835).  An image of the Discopter is shown below.

Although Mr. Weygers apparently received a patent without too much trouble, more recent inventors are not so lucky.  Ever since President Eisenhower established the National Aeronautics and Space Administration (NASA) in 1958, the United States Government (“GOVT”) has taken a keen interest in controlling the heavens.  In other words, if the GOVT believes that an invention may be problematic for national security, or if they believe the invention was siphoned off of government research and development, the GOVT can step in and prohibit the grant of a patent.

“Whenever publication or disclosure by the publication of an application or by the grant of a patent on an invention in which the Government has a property interest might, in the opinion of the head of the interested Government agency, be detrimental to the national security, the Commissioner of Patents upon being so notified shall order that the invention be kept secret and shall withhold the publication of an application or the grant of a patent therefor under the conditions set forth hereinafter.”

In addition, any invention that appears to have significant utility in the conduct of aeronautical and space activities will not be granted as a patent unless:

“applicant files with the Director, with the application or within 30 days after request therefor by the Director, a written statement executed under oath setting forth the full facts concerning the circumstances under which the invention was made and stating the relationship (if any) of the invention to the performance of any work under any contract of the Administration. Copies of each such statement and the application to which it relates shall be transmitted forthwith by the Director to the Administrator.”

See 51 U.S.C. 20135.  In other words, the GOVT does not want just anyone using their resources to get a patent that rightfully belongs to them, or to a specific agency such as NASA.  Failure by an inventor to file the required statement will result in abandonment of the patent application.

One such patent application that caught the eye of the GOVT was U.S. Patent Application 11/027,969 titled “Photon Spacecraft,” which was issued a notice by the United States Department of Commerce that the invention was of interest to NASA and subject to a property rights review.  The application ultimately went abandoned.

IN SUM, if you invent a flying saucer on your own accord and want to file a patent application, be prepared to explain just how you conceived of the idea because NASA may want to take your flying saucer for a permanent ride.